Queensland raider Rothfire has upstaged Sydney's best colts to win The Run To The Rose as Farnan flopped after bolting on jockey Hugh Bowman.

Bowman and co-trainer Adrian Bott were hauled into the stewards room over tactics on the Golden Slipper winner, who raced to a runaway lead and punctured in the straight.

Bowman said when Jim Byrne on Rothfire showed no interest in going to the front he took up the running on Farnan.

"I didn't want to lead immediately. I waited five or six strides and I could see Jim wasn't intent on leading so I thought I would cross and when I did and showed my hand, he took hold straight away," Bowman said.

"Unfortunately my horse being first-up he reacted ... and just took off basically."

Rothfire's trainer Rob Heathcote was not on course but stable representative Mel Sharpe, who travelled the world with star sprinter Buffering, said the three-year-old continued to deliver.

"This little horse, he just keeps defying all the odds and taking that next step," Sharpe said.

"He is an absolute gem. He's a real dude, not much fazes him.

Rothfire will remain in Sydney to target the Golden Rose in two weeks and next month's The Everest, in which he holds the miRunners slot.

What an athlete! Greg Radley, @dufficyron and @lizziejelfs take a look at Rothfire's big win in yesterday's Run to the Rose. pic.twitter.com/uvfbbsTzyk

Fierce Impact won the Makybe Diva Stakes but his victory was overshadowed by the return to racing of Russian Camelot, who he defeated narrowly.

The two horses, who are both being set for the Cox Plate, staged a stirring duel for the last 100 metres with Fierce Impact prevailing by a neck to win the Group One, 1600 metre race at Flemington.

It was a triumph for Warwick Farm trainer Matthew Smith who said it was a great result for his small stable and a great effort to defeat a serious racehorse such as Russian Camelot.

"Russian Camelot got the jump on us a bit but given that he's a horse that only does as much as he has to, it was better that he had something to chase," Smith said.

Smith said even though the margin was small, Fierce Impact tended to win in that style.

Zahra thought the seven-year-old was going to win easily but it took a long time to fight off a very good horse in Russian Camelot.

"He got in front of me but I hadn't fully hit my top yet," Zahra said.

"Ollie had got a bit of momentum going before the turn because we'd gone so slow. I had to sprint but he is good in a fight."

FIERCE IMPACT was fierce all the way to the line to win the G1 Makybe Dive Stakes pic.twitter.com/IW34eB22LK

Zoutori made it back-to-back wins in the Bobbie Lewis Quality when he prevailed narrowly in an exciting finish with only a half-length separating the top five across the line.

Jockey Mark Zahra had to call on all of his renowned skill to get Zoutori home by a half-neck in the 1200 metre, Group Two event at Flemington.

Zoutori's co-trainer Matt Ellerton's first remark after the win was that it wasn't as easy as last year but it was fantastic that he got the job done.

"I was saying to Mark (Zahra) before the race that the horse is going well but not flying. His run in the autumn was huge first up and he's run super again today."

Rather than keep Zoutori to sprint races, Ellerton said they would step him out again in distance.

Waller labels Mo'unga a star of the future

There will be no Golden Rose start for Mo'unga but the lightly-raced colt has stamped himself as a star of the future in the eyes of his trainer Chris Waller.

Stepping up to Saturday stakes grade after wins at the Gold Coast and Newcastle, Mo'ungo justified his $2.70 favouritism and maintained his unbeaten record when he pounced late in the Listed Dulcify Stakes (1500m) at Rosehill.

A usually measured Waller was lavish in his praise of the three-year-old but said he won't be pushing him too far too soon, ruling out a Golden Rose start.

"He's not seasoned enough for that type of racing just yet in my opinion but gee, he is going to be something very special to look forward to," Waller said.

"The plan was always the Spring Champion. I think he's got a great future and we don't need to bottom him out too quickly.

"They were decent horses he was racing against. He got back from his wide draw and settled, bided his time and came through them like a real professional."

There was plenty of talent on show yesterday. Greg Radley, @dufficyron and @lizziejelfs talk Mo'unga in the Dulcify. pic.twitter.com/UOnT5uukie

Fituese emerges as an Everest wildcard

John Thompson will give Fituese a chance to showcase her Everest credentials after she claimed the scalp of a luckless Masked Crusader at Rosehill.

Lumping equal top weight of 58kg and forced to race against her usual pattern due to the hot early speed, Fituese ($4) relaxed well for Rachel King and zoomed late to nail Hilo ($6.50) in the final bound.

Masked Crusader ($1.95 fav) had a torrid run midfield and wide but never stopped trying, finishing another three-quarters of a length away.

Thompson had initially planned an interstate preparation for Fituese but a combination of COVID-19 restrictions and the mare's winning return have him aiming higher.

The Randwick trainer hasn't ruled out an Everest shot and is likely to give Fituese an opportunity to press her claims in the Premiere Stakes at Randwick next month.

"Why not?" Thompson said.

"It was on the cards (Premiere), it was just see how she went today and obviously she's gone very well.

Fituese wins in a thrilling finish to take out the Vale Rick Worthington. Cracking ride from @RachelK11. pic.twitter.com/3q36V7ke7D 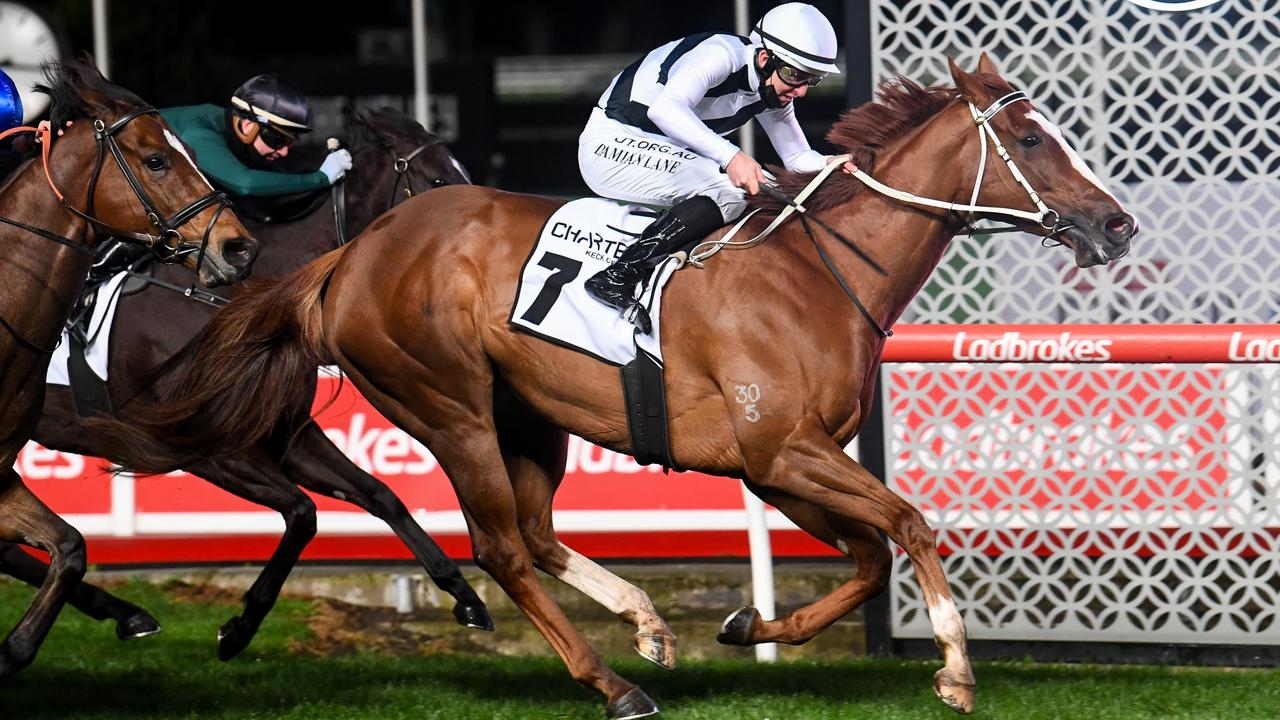 In a sustained show of speed, Pippie has led from start to finish to land her maiden Group One win in the Moir Stakes at Moonee Valley.... 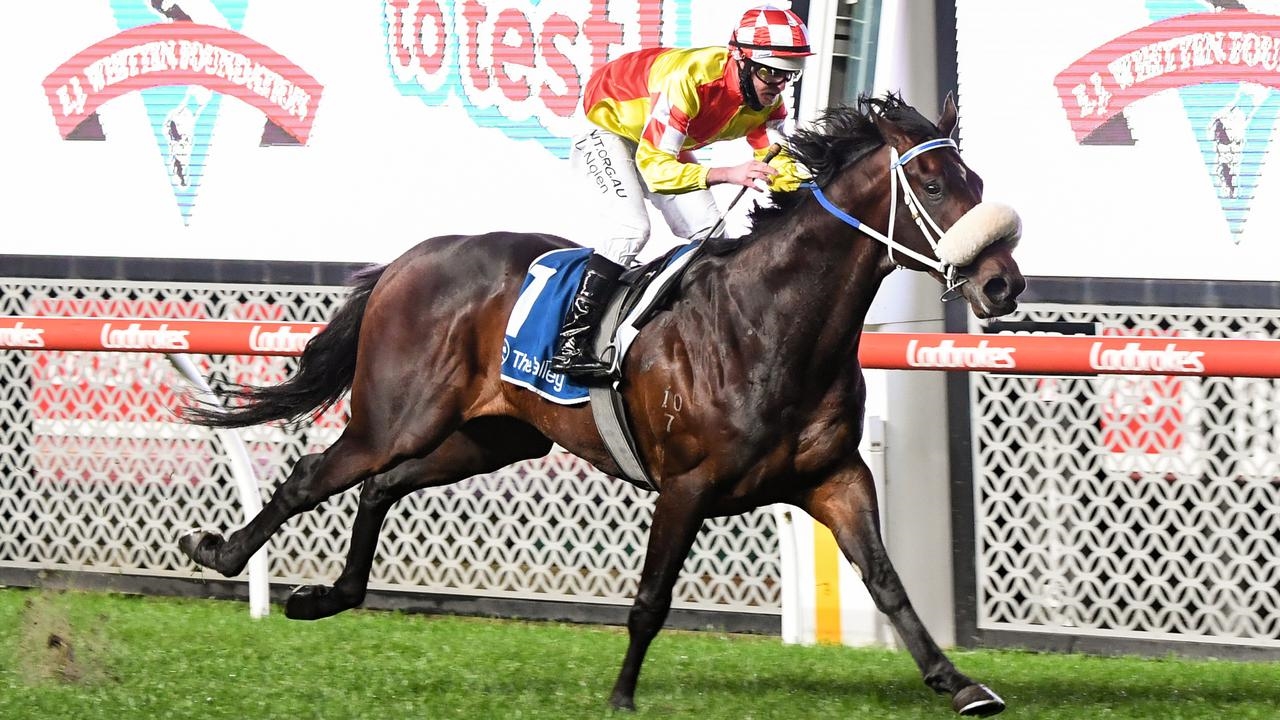 Peter Moody celebrated his first Group race victory since his return to the training ranks after Glenfiddich outclassed his rivals at Moonee Valley....